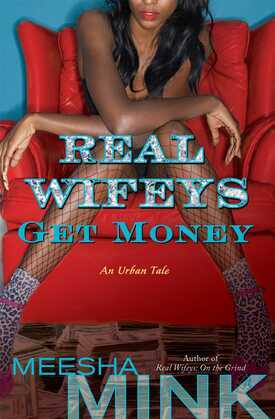 Following the breakout success of The Hoodwives Series, cowritten with De’nesha Diamond, Real Wifeys was a snappy, sexy page-turner that introduced readers to Goldie, a misguided young woman who becomes a modern-day madame. Get Money brings us Luscious Jordan, a minor character in Real Wifeys, who now takes center stage and whose strong will and ruthlessness surpass even Goldie’s.

Goldie’s former business partner, rapper Make $, is serving hard time in prison for her brutal rape. His former wifey, Harriett “Luscious” Jordan, finds herself out in the cold as his family and friends close ranks to protect his money. A first-rate hustler, Luscious builds a successful business as a party promoter. Yet the force that truly drives her is a blind ambition to destroy Goldie, who had stolen Make $ from her.

Now Luscious is tormented by her blazing desire for payback: how far can she go in her bitter quest for revenge without destroying herself too?

In this powerful cautionary tale about the dangers of hatred and vengeance, fans of street literature will get a bold dose of Mink’s authentic urban voice in a hood tale that reads with breathless passion.