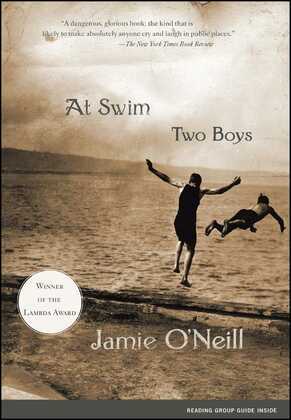 by Jamie O'Neill (Author)
Excerpt
Fiction Literary Historical
warning_amber
One or more licenses for this book have been acquired by your organisation details
EPUB
Unlimited loans, 2 years, One at a time
Details

Jim Mack is a naïve young scholar and the son of a foolish, aspiring shopkeeper. Doyler Doyle is the rough-diamond son—revolutionary and blasphemous—of Mr. Mack’s old army pal. Out at the Forty Foot, that great jut of rock where gentlemen bathe in the nude, the two boys make a pact: Doyler will teach Jim to swim, and in a year, on Easter of 1916, they will swim to the distant beacon of Muglins Rock and claim that island for themselves. All the while Mr. Mack, who has grand plans for a corner shop empire, remains unaware of the depth of the boys’ burgeoning friendship and of the changing landscape of a nation.

Set during the year preceding the Easter Uprising of 1916—Ireland’s brave but fractured revolt against British rule—At Swim, Two Boys is a tender, tragic love story and a brilliant depiction of people caught in the tide of history. Powerful and artful, and ten years in the writing, it is a masterwork from Jamie O’Neill.