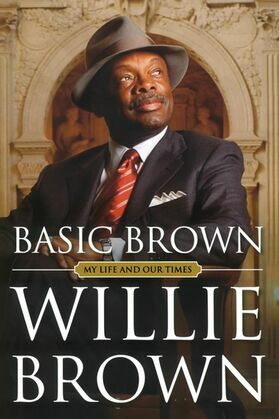 Basic Brown: My Life and Our Times

To The Washington Post, he's "The Last Political Showman of the 20th Century."

Bill Clinton has called him "the real Slick Willie."

Ronald Reagan's secretary of state George Shultz called this famously liberal politician "a man of his word" and endorsed his successful candidacy for mayor of San Francisco.

Indeed Ronald Reagan and Bill Clinton both called upon him for advice and help. He is Willie L. Brown, Jr., and he knows how to get things done in politics, how to work both sides of the aisle to get results. Compared to him, Machiavelli looks meek. And drab.

In Basic Brown, this product of rural, segregated Texas and the urban black neighborhoods of San Francisco tells how he rose through the civil rights movement to become the most potent black politician in America through his shrewd understanding and use of political power and political money. He adapts the lessons he has learned so they can be used by anyone -- black, female, male -- intent on acquiring political power.

And this master of the political deal demonstrates why deals are not enough, and that political power grows only when public good is being done. Willie Brown shows how some of the most far-reaching and socially advanced legislation in American history -- like gun control, legalized abortion, gay rights, and school funding -- was carried out under his guidance and on his watch, and tells of the ingenuity, the political machinations, and the personal perseverance that were required to enact what now seems to many to be obvious legislation. These are stories of breathtaking, sometimes hilarious ruses and gambits that show that even the most high-minded legislation needs the assistance of the skills of a shark, which is what Willie Brown often sees himself as.

Basic Brown is a compendium of insights and stories on the real forces governing power in American political life that will leave you looking at politics anew. It is also the inspiring and funny story of the rise of a gawky teenager in mail-order shoes and trousers who rose to entertain royalty and schoolchildren, superstars and supersize egos, the saintly and the scholarly, while working to transform and open American politics. If you ever wanted to learn how to be slick, a shark, a do-gooder, and a man of your word, Willie L. Brown, Jr., is the storyteller for you.