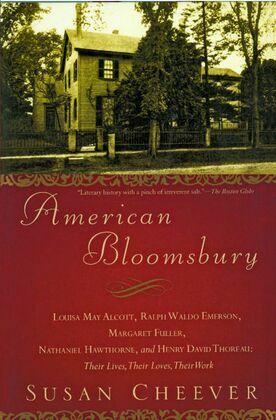 Even the most devoted readers of nineteenth-century American literature often assume that the men and women behind the masterpieces were as dull and staid as the era's static daguerreotypes. Susan Cheever's latest work, however, brings new life to the well-known literary personages who produced such cherished works as The Scarlet Letter, Moby-Dick, Walden, and Little Women. Rendering in full color the tumultuous, often scandalous lives of these volatile and vulnerable geniuses, Cheever's dynamic narrative reminds us that, while these literary heroes now seem secure of their spots in the canon, they were once considered avant-garde, bohemian types, at odds with the establishment.

These remarkable men and women were so improbably concentrated in placid Concord, Massachusetts, that Henry James referred to the town as the "biggest little place in America." Among the host of luminaries who floated in and out of Concord's "American Bloomsbury" as satellites of the venerable intellect and prodigious fortune of Ralph Waldo Emerson were Henry David Thoreau -- perpetual second to his mentor in both love and career; Louisa May Alcott -- dreamy girl and ambitious spinster; Nathaniel Hawthorne -- dilettante and cad; and Margaret Fuller -- glamorous editor and foreign correspondent.

Perhaps inevitably, given the smallness of the place and the idiosyncrasies of its residents, the members of the prestigious circle became both intellectually and romantically entangled: Thoreau serenaded an infatuated Louisa on his flute. Vying with Hawthorne for Fuller's attention, Emerson wrote the fiery feminist love letters while she resided (yards away from his wife) in his guest room. Herman Melville was, according to some, ultimately driven mad by his consuming and unrequited affection for Hawthorne.

Far from typically Victorian, this group of intellectuals, like their British Bloomsbury counterparts to whom the title refers, not only questioned established literary forms, but also resisted old moral and social strictures. Thoreau, of course, famously retreated to a plot of land on Walden Pond to escape capitalism, pick berries, and ponder nature. More shocking was the group's ambivalence toward the institution of marriage. Inclined to bend the rules of its bonds, many of its members spent time at the notorious commune, Brook Farm, and because liberal theories could not entirely guarantee against jealousy, the tension of real or imagined infidelities was always near the surface.
Susan Cheever reacquaints us with the sexy, subversive side of Concord's nineteenth-century intellectuals, restoring in three dimensions the literary personalities whose work is at the heart of our national history and cultural identity.