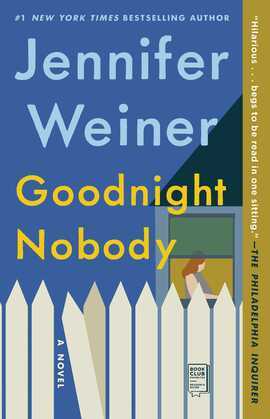 by Jennifer Weiner (Author)
Excerpt
Fiction Literary
warning_amber
One or more licenses for this book have been acquired by your organisation details
EPUB
Unlimited loans, 2 years, One at a time
Details

New York Times bestselling author Jennifer Weiner's newest novel tells the story of a young mother's move to a postcard-perfect Connecticut town and the secrets she uncovers there.
For Kate Klein, a semi-accidental mother of three, suburbia's been full of unpleasant surprises. Her once-loving husband is hardly ever home. The supermommies on the playground routinely snub her. Her days are spent carpooling and enduring endless games of Candy Land, and at night, most of her orgasms are of the do-it-yourself variety.
When a fellow mother is murdered, Kate finds that the unsolved mystery is one of the most interesting things to happen in Upchurch since her neighbors broke ground for a guesthouse and cracked their septic tank. Even though Kate's husband and the police chief warn her that crime-fighting's a job best left to professionals, she can't let it go.
So Kate launches an unofficial investigation -- from 8:45 to 11:30 on Mondays, Wednesdays, and Fridays, when her kids are in nursery school -- with the help of her hilarious best friend, carpet heiress Janie Segal, and Evan McKenna, a former flame she thought she'd left behind in New York City.
As the search for the killer progresses, Kate is drawn deeper into the murdered woman's double life. She discovers the secrets and lies behind Upchurch's placid picket-fence facade -- and the choices and compromises all modern women make as they navigate between independence and obligation, small towns and big cities, being a mother and having a life of one's own.
Engrossing, suspenseful, and laugh-out-loud funny, Goodnight Nobody is another unputdownable, timely tale; an insightful mystery with a great heart and a narrator you'll never forget.