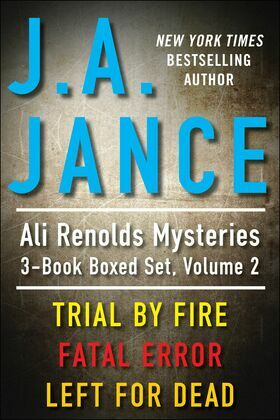 Trial by Fire
In the heat of the Arizona desert, a raging fire pushes temperatures to a deadly degree, and one woman is left to burn. Pulled naked and barely breathing from the fire, the victim has no idea who she is, let alone who would do this to her—or why. Then a savior appears. Sister Anselm is a devoted advocate for unidentified patients, but to Jane Doe’s remorseless would-be killer, she poses a serious threat. Ali Reynolds, the police department’s new media consultant, struggles to help Sister Anselm locate the missing relatives. But their efforts may be exposing the victim once more to danger. In the fearless pursuit of justice, Ali discovers a secret even darker and more twisted than she ever could have imagined.

Fatal Error
Ali Reynolds begins the summer thinking her most difficult challenge will be surviving a six-week-long course as the lone forty-something female at the Arizona Police Academy. However, when Brenda Riley, a former colleague, shows up in town with an alcohol problem and an unlikely story about a missing fiancé, Ali reluctantly agrees to help. But when the man posing as Brenda’s fiancé is viciously murdered and the police focus their investigation on Brenda, Ali is quickly drawn into a web of online intrigue that may lead to a real-world fatal error.

Left for Dead
When one of Ali’s former Arizona Police Academy classmates is gunned down and left to die, he is at first assumed to be an innocent victim of the violent drug cartels. But the crime scene investigation reveals there’s much more to the story. Summoned to his hospital bedside, Ali meets another seriously injured victim—an unidentified young woman, presumed to be an illegal border crosser, who was raped and savagely beaten. Ali is determined to seek justice in both cases. But as she zeroes in on the truth, the real killer is lining her up in the crosshairs…