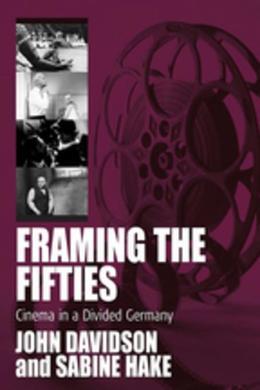 Framing the Fifties: Cinema in a Divided Germany

The demise of the New German Cinema and the return of popular cinema since the 1990s have led to a renewed interest in the postwar years and the complicated relationship between East and West German cinema in particular. A survey of the 1950s, as offered here for the first time, is therefore long overdue. Moving beyond the contempt for "Papa's Kino" and the nostalgia for the fifties found in much of the existing literature, this anthology explores new uncharted territories, traces hidden connections, discovers unknown treasures, and challenges conventional interpretations. Informed by cultural studies, gender studies, and the study of popular cinema, this anthology offers a more complete account by focusing on popular genres, famous stars, and dominant practices, by taking into account the complicated relationships between East vs. West German, German vs. European, and European vs. American cinemas; and by paying close attention to the economic and political conditions of film production and reception during this little-known period of German film history.