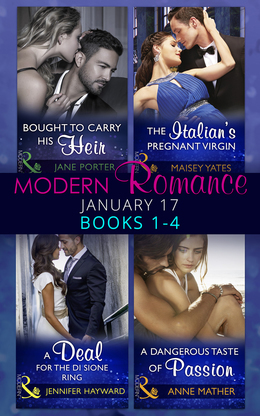 Prepare to discover a new sexy man this New Year…

A Deal for the Di Sione Ring by Jennifer Hayward

‘Marry me, sell me the ring and I will fly you out of here tonight.’

Hotel magnate Nate Brunswick’s faith in marriage was destroyed by his father. But in searching for the ring that his beloved grandfather has asked him to retrieve, the illegitimate Di Sione who hates weddings finds himself inconveniently engaged!

The alluring owner of the ring, Mina Mastraintino, can only pass it on once she’s married. Quick vows and an even quicker annulment should be easy… but the exquisite, impromptu wedding night gives them both far more than they planned!

You will be my wife…

Esther Abbott was backpacking across Europe when she was approached about being a surrogate. Desperately in need of the money, Esther agreed. But when the deal falls apart, she’s left pregnant and alone, with no one to turn to…except the baby’s father!

Learning he is to have a child with a woman he’s never met is a scandal Italian billionaire Renzo Valenti can’t afford. Following his recent bitter divorce and with an impeccable reputation to maintain, Renzo has no choice but to claim the child…and Esther as his wife!

A Dangerous Taste of Passion by Anne Mather

Will she surrender to the stranger at Orchid Cay?

For Lily Fielding the small, safe Caribbean island is all she’s ever known. But the appearance of an intriguing newcomer is about to change everything for this unworldly vicar’s daughter, for the sensual awakening he promises is both intoxicating and illicit…

Raphael Oliveira should resist the temptation that beautiful Lily presents; after all, he knows that wherever he goes, danger follows… Although, once she is under his spell, Rafe’s intense passion and dark past threaten to destroy them both!

Bought to Carry His Heir by Jane Porter

When Georgia Nielsen is asked to be surrogate for an enigmatic tycoon she can’t afford to say no. Before she realises that she’s struck a deal with the devil she’s trapped on his isolated Greek island, with no escape from the brooding master who stalks its shores!

Scarred by the loss of his wife, Nikos Panos’s future rests on leaving behind a legacy. But Georgia’s constant presence threatens to unleash the powerful hunger he’s kept caged for so long. If he wants defiant Georgia to submit he must confront the demons that haunt him…