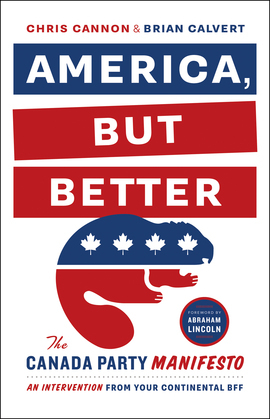 by Chris Cannon (Author), Brian Calvert (Author)
Non-Fiction Humor Topic Political Social science Political science Political Ideologies
EPUB
unlimited loans, One at a time
Details
As the American election increasingly resembles a production of CATS performed by actual cats, U.S. citizens are looking for a new leader. That leader is Canada, and they want your vote for president of the United States.

Since launching their viral video campaign in January, the Canada Party has been covered around the world, including CNN, BBC, the Huffington Post, and German State Television. America, but Better: the Canada Party Manifesto, balances the doctrine of American exceptionalism with a dose of Canadian humility and common sense to secure Canada as the new leader of the free world, by proxy.

Their promises: One gay couple will be allowed to marry for every straight couple that gets divorced. The phrase "job creators" will be changed to "job creationists," and they will be given seven days to actually create some.
Corporations will still be people, but if they can't provide a birth certificate they will be legally obligated to care for your lawn. Corners will be installed in the Oval Office, and timeouts given to congressmen who can't play nice.

Devoted to restoring America to its former glory, the Canada Party will soon have the whole world chanting, "Yes We Canada."