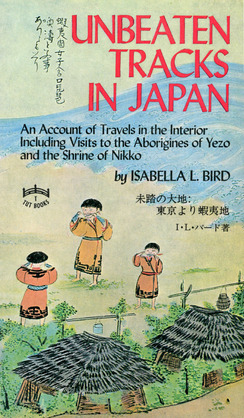 by Isabella Bird (Author)
Fiction Travel writing Nonfiction Social science Anthropology Travel Asia Japan
EPUB
Unlimited loans, One at a time
Details
In 1878, a decade after Japan was launched into the world of modern nations by the Meiji restoration of 1868, Isabella Lucy Bird set off alone to explore the interior.

Ninety years ago Japan was still a mysterious country to Westerners. Miss Bird must have presented a fearsome sight to Japanese villagers when she came into view clad in American mountain dress and Wellington boots. However the country people liked her. She took off her boots before entering houses, she was of small stature, of quiet voice, and courteous! Many of the Japanese she met had never seen a European before. They were convinced all Westerners were uncouth barbarians.

The Japan Isabella Bird describes is not the sentimental world of a Madame Butterfly, festooned with cherry blossoms. She describes real people in back country districts. Peasant life in Japan had never been easy but in early Meiji Japan, when the country was in a state of cultural shock following the opening of its doors to Western civilization, the drain of wealth from rural Japan to all-important Tokyo was particularly hard on the rural population. In this classic Japanese travelogue we see a side of Japan that is little known today.