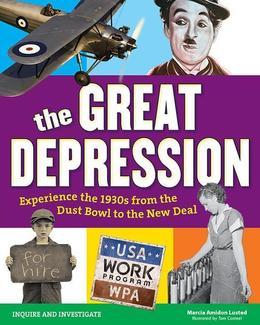 The Great Depression: Experience the 1930s from the Dust Bowl to the New Deal

de Marcia Amidon Lusted (Auteur), Tom Casteel (Illustrateur)
Non-fiction Jeunesse Histoire États-Unis 20e siècle Inventions Politique et gouvernement
EPUB
Prêts illimités, Un à la fois
Détails
In The Great Depression: Experience the 1930s From the Dust Bowl to the New Deal, readers ages 12 to 15 investigate the causes, duration, and outcome of the Great Depression, the period of time when more than 20 percent of Americans were unemployed. They discover how people coped, what new inventions came about, and how the economics of the country affected the arts, sciences, and politics of the times. The decade saw the inauguration of many social programs that Americans still benefit from today. The combination of President Roosevelt’s New Deal and the dawning of World War II gave enough economic stimulus to boost the United States out of its slump and into a new era of recovery.

In The Great Depression, students explore what it meant to live during this time. Projects such as designing a 1930s outfit and creating a journal from the point of view of a kid whose family is on the road help infuse the content with realism and practicality. In-depth investigations of primary sources from the period allow readers to engage in further, independent study of the times. Additional materials include a glossary, a list of current reference works, and Internet resources.