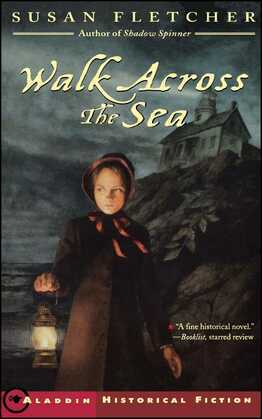 Walk Across the Sea

The first time Eliza sees Wah Chung, he is squatting beside some rocks on the pathway to her island. Eliza's island is the one on which the lighthouse -- operated and maintained by her father -- stands, sending its beacon of safety to ships at sea. The pathway to the island is a treacherous one, engulfed by water when the tide is high, passable only when the tide is low and reveals the secret life of the sea on the rocks and in the pools that remain.

Although Eliza is careful to avoid Wah Chung as he paints among the rocks (after all, he is a Chinaman), when a "sneaker wave" approaches the passage, it is Wah Chung who warns her and then rescues Eliza's goat, Parthenia, before both are swept away.

It is a simple act of kindness, but one that causes Eliza to doubt many things. Are the Celestials, as the Chinese immigrants are called, such a threat to their small town? Are they really heathens, as her father claims? And what should she do when the townspeople conspire to expel these people forcibly? How will Eliza act, in the face of her father's strong beliefs and his duties as the lighthouse keeper, when Wah Chung comes to her for help in return?