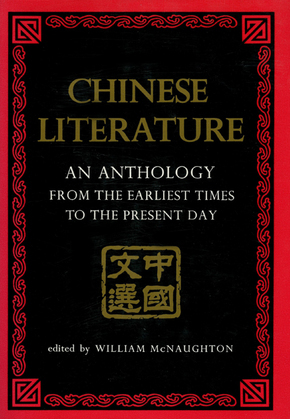 Chinese Literature: AN ANTHOLOGY FROM THE EARLIEST TIMES TO THE PRESENT DAY

by William McNaughton (Editor)
Fiction Classics
Almost three thousand years of Chinese literature have been gathered together in Chinese Literature: An Anthology from the Earliest Times to the Present Day.

The earliest preserved folk songs of the peasantry; the major works of the "Golden Age" of Chinese philosophy; the "prose-songs" and the later skillful poems of the T'ang dynasty ; the short stories and plays; the novels; and the poems and stories of men who have made modern China - all these are represented in this anthology, in complete works or in excerpts.

Editor William McNaughton presents Chinese literature as an organic development, so that the student as well as the general reader can see how genre evolved into genre and form developed into form. He has based this presentationon work by Chinese critics and scholars that, until recently, has not been available outside China.

In addition to classical writings, the poems and stories by twentieth-century writers, most of which have been newly translated into English, give new insights into modern Chinese society and individuals, and make this the most complete one-volume anthology ever published.