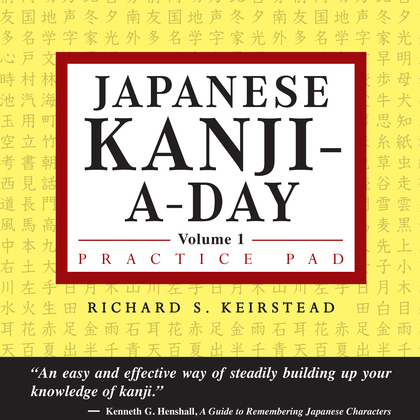 by Richard S. Keirstead (Author)
Non-Fiction Languages study Japanese
EPUB
unlimited loans, One at a time
Details
"An easy and effective way of steadily building up your kanji."—Kenneth G. Henshall, A guide to Remembering Japanese Characters

This calendar–like practice pad allows you to effectively practice basic Japanese kanji and learn a year's wroth of kanji in just minutes a day.
Although more people are studying the Japanese language than ever before, others are still wary of starting because they believe, "it's too difficult." But Kanji–A–Day, Volume 1 will show absolute beginners that learning Japanese kanji is highly manageable when absorbed in small doses. It will help intermediate Japanese learners review and improve upon their past studies and practice Kanji every day. Japanese kanji are fascinating pictographic characters that were originally adopted from written Chinese. After a few weeks of gradual progress your ability to read Kanji, write Kanji and pronounce Japanese will grow tremendously.

This calendar like desk companion starts with the most basic Kanji and builds upon itself, one day at a time. For easy reference and review, a booklet listing the 365 kanji is included.

Each of the 365 pages contain these six components: To get started with Kanji–A–Day, turn to Day One and begin by studying the character, its readings, meanings and sample compounds. Then tear off the sheet and, using the stroke–order guide, practice writing the character in the spaces provided. In a matter of days you'll be on your way to reading and writing kanji with ease!