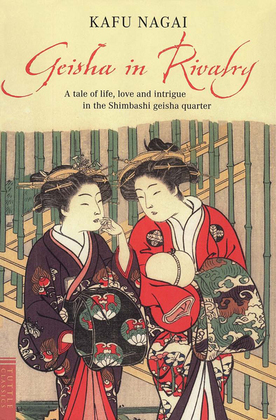 by Kafu Nagai (Author), Kurt Meissner (Translator), Ralph Friedrich (Translator)
Fiction Classics Fantasy Historical
Geisha in Rivalry, first published as Udekurabe in 1918, has a secure place among Kafu Nagai's masterpieces. Set against the backdrop of Tokyo's Shimbashi geisha district, a company of vivid characters play out their drama of illicit love, shady intrigue, and unrelenting rivalry. In the forefront are the geisha: some powerful and spiteful like the imperious Rikiji, some crude and obvious like the gaudy Kikuchiyo, some naïve and pathetic like the heroine Komayo, and all engaged in finding a place for themselves in a world that offers no easy route of escape from their profession. Here, too, are the patrons of the geisha: the playboys, the actors, the successful businessmen, and the "upstart gentlemen" of late Meiji society. And here, again, are those who make the machinery of this world function: the geisha house proprietors, the teahouse mistresses, the actors' retainers, the servants. And, finally, here are the parasites of the demimonde, who live off its other denizens through guile and deceit. Through this often sordid but fascinating pageant move the figures of the geisha Komayo, her lovers, and the women who conspire to steal them from her.