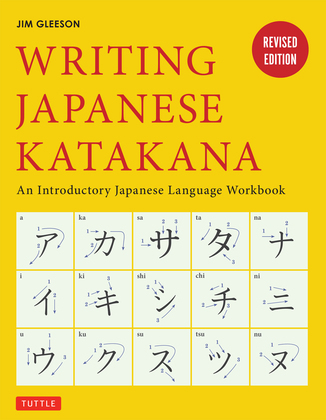 Anybody who is able to master English, with its irregular spellings and idiosyncratic pronunciations, is more than equipped to master written Japanese. The hiragana and katakana syllabaries are purely phonetic characters, which function much like the letters of the English alphabet. In this respect, kana are quite different from kanji characters, which are based on Chinese ideographs and which represent ideas. The katakana syllabary is used primarily to represent borrowed words (from languages other than Chinese), although it is also used for botanical names and is sometimes used in place of hiragana or kanji for emphasis. In some ways, the use of katakana in Japanese parallels the use of italics in English.

Writing practice is the most effective method of mastering written Japanese, and the large open format of this workbook is designed to invite the student to pick up a pencil and start writing. Written Japanese comprises two phonetic syllabaries, hiragana and katakana, and a set of kanji characters that are based on Chinese ideographs. This workbook has been carefully designed to facilitate the quick and easy mastery of the 46–character katakana alphabet, making it the perfect tool to begin the process of mastering written Japanese. Each character is introduced with brushed, handwritten and typed samples that enhance character recognition. Extensive space for writing allows maximum practice to facilitate memorization and to ensure proper character formation. Entertaining illustrations and amusing examples of loan–words that use katakana in Japanese writings further reinforce memorization in a fun way. Writing Katakana is tailored to the specific needs of young students of the Japanese language, but is also well suited to beginning students of any age. This workbook contains: