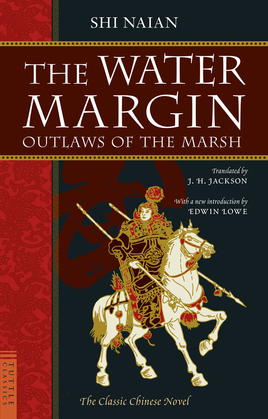 The Water Margin: Outlaws of the Marsh

by Shi Naian (Author), J.H. Jackson (Translator)
Fiction Classics Action & adventure
Based upon the historical bandit Song Jiang and his companions, this Chinese equivalent of the English classic Robin Hood and His Merry Men is an epic tale of rebellion against tyranny and has been thrilling and inspiring readers for hundreds of years.

This edition of the classic J. H. Jackson translation features a new preface and introduction by Edwin Lowe, which gives the history of the book and puts the story into perspective for modern readers. First translated into English by Pearl S. Buck in 1933 as All Men Are Brothers, the original edition of the J.H. Jackson translation appeared under the title The Water Margin in 1937. In this updated edition, Edwin Lowe addresses many of the shortcomings found in the original J.H. Jackson translation, and replaces the original grit and flavor of Shuihui Zhuan found in Chinese versions, including the sexual seduction, explicit descriptions of brutality and barbarity, and the profane voices of the thieving, scheming, drinking, fighting, pimping lower classes of Song Dynasty China. Similarly, the Chinese deities, Bodhisattvas, gods and demons have reclaimed their true names, as has the lecherous, over-sexed and ill-fated Ximen Qing. All of which was sanitized out when first published in 1937.