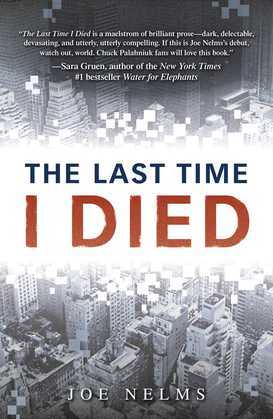 The Last Time I Died

“One of the most compelling novels in recent memory” (Booklist) by a bright light in irreverent and compelling fiction: Joe Nelms, author of Formerly Fingerman.

Christian Franco is embracing the despair of divorce, doing nothing to slow the implosion of his career, friendships, and relationships. He camps out at bars to pick fights, finding that getting his ass kicked allows him his only meditative moments, something he explores with sardonic zeal.

Nine years of his childhood are entirely repressed, a consequence of his father killing his mother when Christian was eight. But as Christian is beaten to death in a bar brawl, his life flashes before his eyes and a long repressed memory resurfaces: the stoop of his childhood home, his father in the back of a cop car, and his mother being wheeled away on a gurney. Christian is resuscitated and comes alive with driving purpose. He must know more.

What follows is Christian's increasingly desperate attempts to kill himself, be revived, and slowly piece together snapshots from his childhood to understand this rediscovered self-knowledge and find how it can help him rebuild his life and marriage. Alternating between calculated suicide attempts and heartbreaking memories of a happier time, Christian revels in the underbelly of New York City in a spectacular downward spiral.

Nelms captures Christian's spectacular implosion in punchy, quotable prose, covering a Gotham from glossy Midtown offices to seedy Bronx dog fights. The Last Time I Died has the murky, teasing reality of Fight Club and the gleeful violence of American Psycho, but is entirely fresh, in a voice all its own.