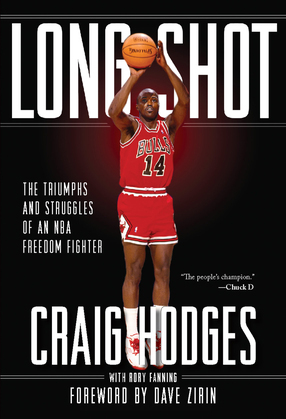 As a member of the 1992 world-champion Chicago Bulls, a dashiki-clad Hodges delivered a handwritten letter to President George H. W. Bush demanding that he do more to address racism and economic inequality. Hodges was also a vocal union activist, initiated a boycott against Nike, and spoke out forcefully against police brutality in the wake of the Rodney King beating.

But his outspokenness cost him dearly. In the prime of his career, after ten NBA seasons, Hodges was blackballed from the NBA for using his platform as a professional athlete to stand up for justice.

“Hodges has told his compelling life story with fiery passion, looping around a cast of characters stretching from Jordan, Magic Johnson and Phil Jackson back to Muhammad Ali, Arthur Ashe and Kareem Abdul-Jabbar, before returning to the present.” —Guardian

“Craig Hodges is someone I looked up to as a child & now as an adult . . . I read Long Shot in like two hours, I couldn’t stop turning pages. There are so many hooks in it.” —Jesse Williams, actor, producer, director, activist

“A beautifully written, brutally honest book. If you loved the Michael Jordan-era Chicago Bulls, if you love black history, or if you are fascinated by the politics of sports, I highly recommend this book. Simply put: Craig Hodges’ life is incredible and Long Shot is invaluable.” —AETHLON: The Journal of Sport Literature