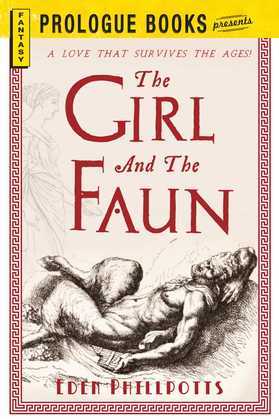 The Girl and the Faun

In the first days of spring in ancient Greece, the faun Coix falls for the most terribly beautiful creature he’s ever beheld: the shepherd’s daughter Iole. Despite Coix’s best efforts, she chooses a mere human over him. Heartbroken and determined to win her back, Coix begs the god Pan to change him into a human so he can love Iole as she wants to be loved. But when he gets his wish, Coix awakens without his memoryand without Iole. Eden Phillpotts’s classical fantasy will whisk you away to a world where shepherdesses are fair, gods wax philosophical, and where a lesson is always learned in the nick of time.

“[From this book’s paradise, the writer] can lay on his back, weave dreams of fancy, and watch with a gentle irony the metamorphoses of gods and men.”
The Saturday Review, 1926