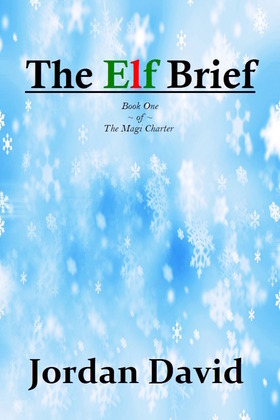 About the series:
For over two thousand years the legend of Santa Claus has endured. His is a mission of peace as outlined in the Magi Charter, given to the first Santa by the Child. From humble beginnings following that First Christmas the Santa lineage has been passed down through the ages. This epic adventure tells the story of those Santas from the founding of the North Pole and the origin of the ancient elves, to our modern times where the world's problems effect even those in the secluded complex of the North, and concluding in the distant future which finds Santa and the elves committed to their mission on a galactic scale where Christmas traditions are barely recognizable. Even in that era those committed to the Charter must find a way to deliver that which is needed most to those most deserving.

The Elf Brief:
Santas come and go, but elves are forever.... The North Pole is preparing for the retirement of a great Santa and anxiously awaits the arrival of the new Santa. Noel, a tenacious elf from the tiny reference department has been tapped for the special task of assistant to the new Santa. The elf will have to quickly get over his astonishment and take on the challenges that come with unprecedented access to the inner workings of the North Pole. Intrigue and mystery must be unraveled if he is to prevent an old friend from leaving and ensure the continuity of the Christmas tradition...