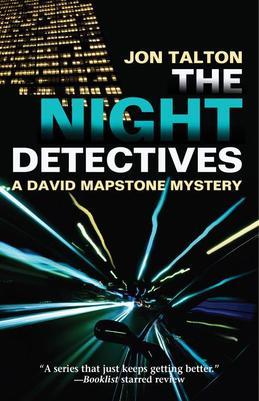 The private-detective business starts out badly for former Phoenix Deputy David Mapstone and his old friend Sheriff Mike Peralta. Mapstone and Peralta are investigating a suspicious death involving a young Arizona woman who fell from a condo tower in San Diego. The police call Grace Hunter's death a suicide, but the client doesn't buy it. He's her brother. Or is he? Shortly after hiring the team, he is gunned down, and police find multiple driver's licenses. His real identity is a mystery. David travels to San Diego reluctantly. He was a history professor there and married to a beautiful, wealthy woman. Now his second marriage is hanging by a thread, with his wife Lindsey gone and their future uncertain. Peralta makes him go anyway. This is their first case and they must get it right. In San Diego, David finds the woman's boyfriend, who is trying to care for their baby. He, too, hires the pair to solve Grace's death. Their work reveals that this was no suicide, and Grace proves to be only the first victim of a murderous spree that reaches into the world of high-priced call girls, their millionaire clients, the white supremacist movement and a high stakes kidnapping. Neither the lovely beaches of San Diego nor the enchanting desert of Arizona can conceal the brutal danger that lies beneath. Solving the case will require all of Mapstone's and Peralta's skills, and even these might not be enough to stop killers who are matching them step for step and planning far more deadly attacks.