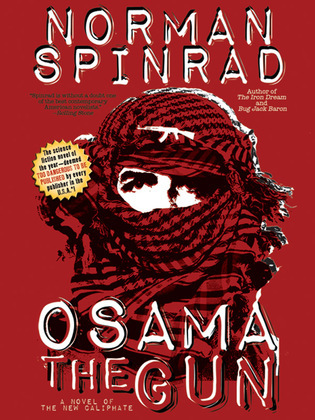 In this thought-provoking work set in the near future and first published in 2007, Spinrad (Raising Hell) traces the course of his protagonist's life from naive youth to veteran soldier... At its core, the book is about a young man struggling with his faith and the politics that are rightly or wrongly attached to that faith, and his choices feel plausible even to readers who would make very different ones. -- Publishers Weekly, Starred Review

OSAMA THE GUN, set in a not-so-far future when the "Sons of Osama" have established a powerful Islamic Caliphate with Pakistani nuclear weapons and Arabian oil money, is the story of one of those "sons" of the martyr, a naive and sincere young man who becomes a Caliphate secret agent to escape its closed confines and see the world -- and finds himself becoming the reluctant hero of the title.

Osama the Gun becomes a terrorist leader on a small scale by happenstance, a mercenary used by Islamic forces fighting an American proxy invasion in the oil lands of Nigeria, an iconic figure in the manner of "El Che." All the while he charms the reader as a likable, sincere, idealistic, and sympathetic human doing very unsympathetic things to the interests of the United States of America.

"I wanted the reader to hate the sin, but love the sinner, because I felt it had to be done, and since no one else seemed to be willing to do it, I had to try to do it myself, come what may. Because Islam was being confused with its radical Middle Eastern jihadhis, and Arabs in general with terrorists, and it seemed to me that the alien jihadhist consciousness had to be experienced from within and empathetically understood. Which was why OSAMA THE GUN had to be written, and why, as one foaming at the mouth rejection letter predicted, no American publisher would touch this book." -- Norman Spinrad