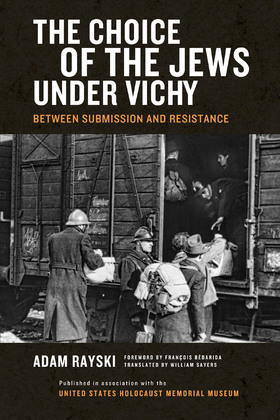 Choice of the Jews under Vichy, The: Between Submission and Resistance

In The Choice of the Jews under Vichy, Adam Rayski buttresses his analysis of war-era archival materials with his own personal testimony. His research in the archives of the military, the Central Consistory of the Jews of France, the police, and Philippe Pétain demonstrates the Vichy government's role as a zealous accomplice in the Nazi program of genocide. He documents the efforts and absence of efforts of French Protestant and Catholic groups on behalf of their Jewish countrymen; he also explores the prewar divide between French-born and immigrant Jews, manifested in cultural conflicts and mutual antagonism as well as in varied initial responses to Vichy's antisemitic edicts and actions. Rayski reveals how these Jewish communities eventually set aside their differences and united to resist the Nazi threat.