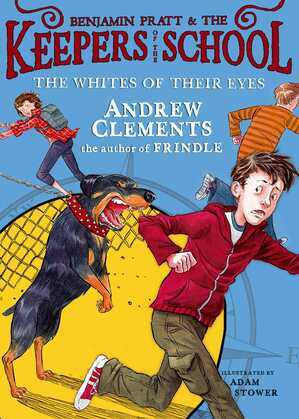 The Whites of Their Eyes

Andrew Clements delivers the latest in his adventure-filled school series.

This could be the last great Memorial Day weekend on Barclay Bay, and Ben knows it. This time next year, he might not be able to stand in the yard of the Oakes School and watch the harbor shake off winter?boats buzzing just beyond the bulkhead and families spreading picnics in the fields. If the school gets torn down and replaced by an amusement park, the town will never be the same. But that?s only if the school gets torn down. Ben and Jill are determined to keep that from happening. And the evil janitor Lyman has taken note. He?s following their every move?and undoing their progress along the way. Good thing Ben and Jill have a secret weapon. (Who knew that annoying Robert Gerritt would be such a spy wiz?) But Lyman has a secret weapon as well: a vicious guard dog. These kids are smart, but can they outsmart Lyman?and his beast?as the clock tick, tick, ticks toward total demolition?