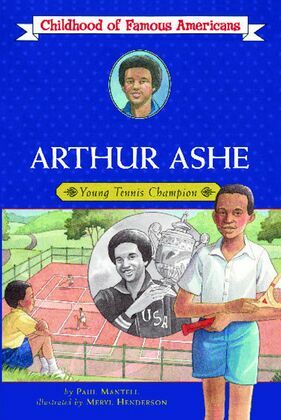 A childhood biography of a groundbreaking African-American athlete.

Arthur Ashe (1943-1993) was the first African American man to win a major tennis tournament.
He did not start out with a love of the game--his favorite sport was actually baseball--but growing up in the racist south, Arthur decided he would one day play sports on courts that did not allow black athletes. After proving himself a natural on the tennis court, and struggling with committing to the game, Arthur enjoyed many years of championship tennis, crowned by two achievements: his victory over Jimmy Connors at Wimbledon, and competing in Byrd Park, Virginia, a park he was not allowed to play in when he was a child. Alas, during heart surgery in 1983, it is likely that Ashe was given blood tainted with HIV. He became an active fundraiser and speaker on behalf of AIDS research. In 1997 the U.S. Tennis Center's main stadium in New York City was named Arthur Ashe Stadium in honor of his many contributions to the game.
This inspiring biography showcases Ashe's courage in the face of bigotry.