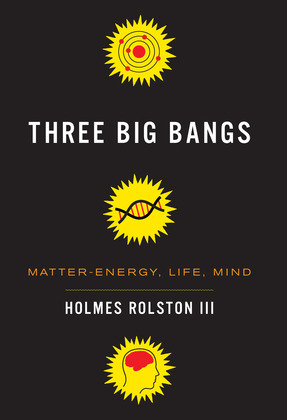 Rational explanations of the universe leave the spiritually curious cold, and religion-based theories tend to devalue the findings of science. By dividing the creation of matter, energy, life, and mind into three big bangs, Holmes Rolston III strikes a middle path between these two camps. He divines a history of the universe that respects both scientific discovery and the potential presence of an underlying intelligence.

In Rolston's first bang, matter-energy appears, initially in simpler forms but with a remarkable capacity for generating heavier elements. The size and expansion rate of the universe, the nature of electromagnetism, gravity, and nuclear forces, and other cosmic features all enable the second big bang, the explosion of life on Earth. As DNA begins to discover, store, and transfer information, life endures to establish billions of species. Cognitive capacities escalate, and with neural sentience, the third big bang results: human genius. A massive singularity, the human mind gives birth to language and culture, increasing the brain's complexity and promoting the spread of ideas. Ideas generate ideals, which leads life to take on spirit. The nature of matter-energy, genes, and their genesis therefore encourages humans to wonder where they are, who they are, and what they should do. Rolston draws on a variety of fields as he studies the underlying order of this cybernetic system.