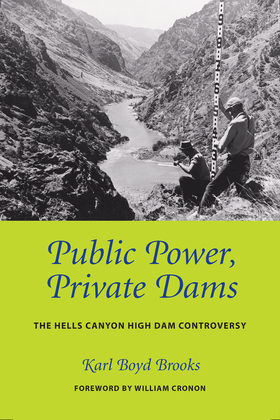 In the years following World War II, the world�s biggest dam was almost built in Hells Canyon on the Snake River in Idaho. Karl Boyd Brooks tells the story of the dam controversy, which became a referendum not only on public-power expansion but also on the environmental implications of the New Deal�s natural resources and economic policy.

Private-power critics of the Hells Canyon High Dam posed difficult questions about the implications of damming rivers to create power and to grow crops. Activists, attorneys, and scientists pioneered legal tactics and political rhetoric that would help to define the environmental movement in the 1960s. The debate, however, was less about endangered salmon or threatened wild country and more about who would control land and water and whether state enterprise or private capital would oversee the supply of electricity.

By thwarting the dam�s construction, Snake Basin irrigators retained control over water as well as economic and political power in Idaho, putting the state on a postwar path that diverged markedly from that of bordering states. In the end, the opponents of the dam were responsible for preserving high deserts and mountain rivers from radical change.

With Public Power, Private Dams, Karl Brooks makes an important contribution not only to the history of the Pacific Northwest and the region�s anadromous fisheries but also to the environmental history of the United States in the period after World War II.