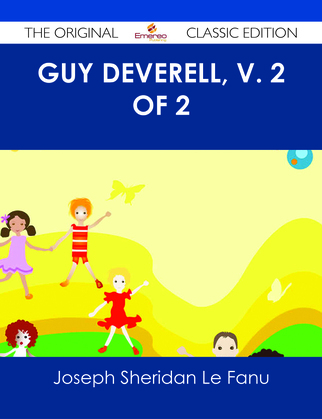 Finally available, a high quality book of the original classic edition of Guy Deverell, v. 2 of 2. It was previously published by other bona fide publishers, and is now, after many years, back in print.

This is a new and freshly published edition of this culturally important work by Joseph Sheridan Le Fanu, which is now, at last, again available to you.

Get the PDF and EPUB NOW as well. Included in your purchase you have Guy Deverell, v. 2 of 2 in EPUB AND PDF format to read on any tablet, eReader, desktop, laptop or smartphone simultaneous - Get it NOW.

Enjoy this classic work today. These selected paragraphs distill the contents and give you a quick look inside Guy Deverell, v. 2 of 2:

'Listen to me: you have maintained a respectable character, I know it: nothing whatever to injure that character shall ever fall from my lips; no human being—but two or three just as much interested in concealing all about it as you or I—shall ever know anything about it; and Sir Jekyl Marlowe has consented to take it down, so soon as the party at present at Marlowe shall have dispersed.'


...Aubrache was at first filled with horror, like the rest; but well knowing that the young man whom he, the stranger, so resembled, had been actually killed as aforesaid, in combat, and having never heard of vampires, which are among the most malignant and awful of the manifestations of the Evil One, and not recognising at all the Hungarian magician, who had been careful to disguise himself effectually; and, above all, relying on letters from the King of Hungary, with which, under a feigned name, as well as with others from the Archbishop of Toledo in Spain, he had come provided, he received him into his house; when the grave magician, who resembled a doctor of a university, and the fair-seeming vampire, being established in the house of their enemy, began to practise, by stealth, their infernal arts.'

After lukewarm reviews of the former novel, set in the Phoenix Park area of Dublin, Le Fanu signed a contract with Richard Bentley, his London publisher, which specified that future novels be stories 'of an English subject and of modern times', a step Bentley thought necessary for Le Fanu to satisfy the English audience.

...However, Sayers' first reference to Le Fanu appears in an earlier Lord Peter Wimsey novel, The Nine Tailors (1934), where he is quoted directly (from Wylder's Hand, in the opening to the seventh 'part' of Chapter II and again in the opening to the second 'part' of Chapter III) and a mysterious letter is referred to (first by Wimsey's valet, Mervyn Bunter) as 'written by a person of no inconsiderable literary ability, who had studied the works of Sheridan Lefanu sic and was, if I may be permitted the expression, bats in the belfry, my lord.'