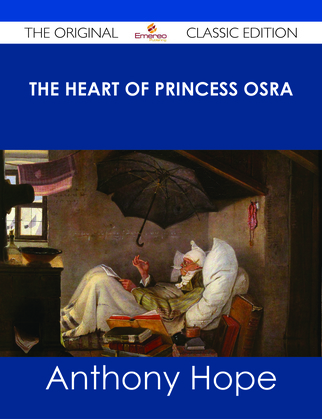 The Heart of Princess Osra - The Original Classic Edition

Finally available, a high quality book of the original classic edition of The Heart of Princess Osra. It was previously published by other bona fide publishers, and is now, after many years, back in print.

Get the PDF and EPUB NOW as well. Included in your purchase you have The Heart of Princess Osra in EPUB AND PDF format to read on any tablet, eReader, desktop, laptop or smartphone simultaneous - Get it NOW.

Enjoy this classic work today. These selected paragraphs distill the contents and give you a quick look inside The Heart of Princess Osra:

Old Lazarus had made a great business of it, and had spent his savings in buying up the better part of the street; but since Jews then might hold no property in Strelsau, pg 2 he had taken all the deeds in the name of Stephen Nados; and when he came to die, being unable to carry his houses or his money with him, having no kindred, and caring not a straw for any man or woman alive save Stephen, he bade Stephen let the deeds be, and, with a last curse against the Christians (of whom Stephen was one, and a devout one), he kissed the young man, and turned his face to the wall and died.

...The heart of women is, as it would seem, a strange thing; for the Princess Osra, hearing what the smith had said and learning that he had fallen passionately in love with her on the mere sight of her beauty, pg 19 suddenly felt a tenderness for him and a greater admiration than she had entertained before; and although she harboured no absurd idea of listening to his madness, or of doing anything in the world but laugh at it as it deserved, yet there came on her a strange dislike of the project that she had herself, in sport, suggested: namely, that the smith should be married immediately to the Countess Hilda by the Lord Bishop of Modenstein.