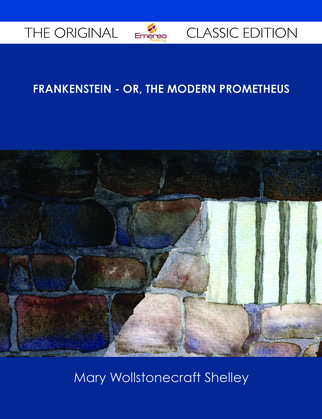 Frankenstein - or, The Modern Prometheus - The Original Classic Edition

Finally available, a high quality book of the original classic edition of Frankenstein - or, The Modern Prometheus. It was previously published by other bona fide publishers, and is now, after many years, back in print.

This is a new and freshly published edition of this culturally important work by Mary Wollstonecraft Shelley, which is now, at last, again available to you.

Get the PDF and EPUB NOW as well. Included in your purchase you have Frankenstein - or, The Modern Prometheus in EPUB AND PDF format to read on any tablet, eReader, desktop, laptop or smartphone simultaneous - Get it NOW.

Enjoy this classic work today. These selected paragraphs distill the contents and give you a quick look inside Frankenstein - or, The Modern Prometheus:

I said in one of my letters, my dear Margaret, that I should find no friend on the wide ocean; yet I have found a man who, before his spirit had been broken by misery, I should have been happy to have possessed as the brother of my heart.


...But, in drawing the picture of my early days, I must not omit to record those events which led, by insensible steps to my after tale of misery: for when I would account to myself for the birth of that passion, which afterwards ruled my destiny, I find it arise, like a mountain river, from ignoble and almost forgotten sources; but, swelling as it proceeded, it became the torrent which, in its course, has swept away all my hopes and joys.

About Mary Wollstonecraft Shelley, the Author:

5 In December 1801, he married Mary Jane Clairmont, a well-educated woman with two young children of her own—Charles and Claire.note 1 Most of Godwin’s friends disliked his new wife, describing her as quick-tempered and quarrelsome;note 2 but Godwin was devoted to her, and the marriage was a success.

...Pregnant and often ill, Mary Godwin had to cope with Percy's joy at the birth of his son by Harriet Shelley in late 1814 and his constant outings with Claire Clairmont.note 3 She was partly consoled by the visits of Hogg, whom she disliked at first but soon considered a close friend.