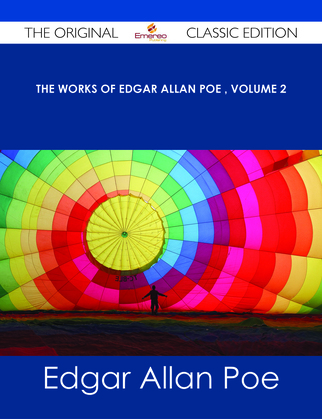 Finally available, a high quality book of the original classic edition of The Works of Edgar Allan Poe ‚ Volume 2. It was previously published by other bona fide publishers, and is now, after many years, back in print.

This is a new and freshly published edition of this culturally important work by Edgar Allan Poe, which is now, at last, again available to you.

Get the PDF and EPUB NOW as well. Included in your purchase you have The Works of Edgar Allan Poe ‚ Volume 2 in EPUB AND PDF format to read on any tablet, eReader, desktop, laptop or smartphone simultaneous - Get it NOW.

Enjoy this classic work today. These selected paragraphs distill the contents and give you a quick look inside The Works of Edgar Allan Poe ‚ Volume 2:

And do you not see also, that such recherchés nooks for concealment are adapted only for ordinary occasions, and would be adopted only by ordinary intellects; for, in all cases of concealment, a disposal of the article concealed—a disposal of it in this recherché manner,—is, in the very first instance, presumable and presumed; and thus its discovery depends, not at all upon the acumen, but altogether upon the mere care, patience, and determination of the seekers; and where the case is of importance—or, what amounts to the same thing in the policial eyes, when the reward is of magnitude,—the qualities in question have never been known to fail.

...HAVING had occasion, lately, in the course of some Oriental investigations, to consult the Tellmenow Isitsoornot, a work which (like the Zohar of Simeon Jochaides) is scarcely known at all, even in Europe; and which has never been quoted, to my knowledge, by any American—if we except, perhaps, the author of the 'Curiosities of American Literature';—having had occasion, I say, to turn over some pages of the first-mentioned very remarkable work, I was not a little astonished to discover that the literary world has hitherto been strangely in error respecting the fate of the vizier's daughter, Scheherazade, as that fate is depicted in the 'Arabian Nights'; and that the denouement there given, if not altogether inaccurate, as far as it goes, is at least to blame in not having gone very much farther.

About Edgar Allan Poe, the Author:

19 Poe gave up on the university after a year, and, not feeling welcome in Richmond, especially when he learned that his sweetheart Royster had married Alexander Shelton, he traveled to Boston in April 1827, sustaining himself with odd jobs as a clerk and newspaper writer.

...Poe is believed to have lived in the home at the age of 23 when he first lived with Maria Clemm and Virginia (as well as his grandmother and possibly his brother William Henry Leonard Poe).