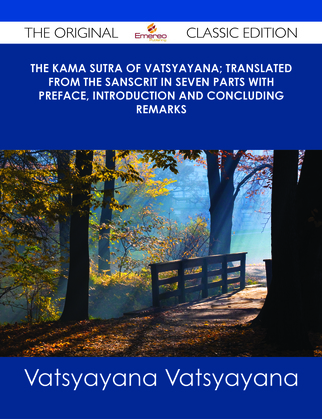 The Kama Sutra of Vatsyayana; Translated From the Sanscrit in Seven Parts With Preface, Introduction and Concluding Remarks - The Original Classic Edition

by Vatsyayana (Author)
Fiction
EPUB
Unlimited loans, One at a time
Details

Finally available, a high quality book of the original classic edition of The Kama Sutra of Vatsyayana; Translated From the Sanscrit in Seven Parts With Preface, Introduction and Concluding Remarks. It was previously published by other bona fide publishers, and is now, after many years, back in print.

This is a new and freshly published edition of this culturally important work by Vatsyayana Vatsyayana, which is now, at last, again available to you.

Get the PDF and EPUB NOW as well. Included in your purchase you have The Kama Sutra of Vatsyayana; Translated From the Sanscrit in Seven Parts With Preface, Introduction and Concluding Remarks in EPUB AND PDF format to read on any tablet, eReader, desktop, laptop or smartphone simultaneous - Get it NOW.

Enjoy this classic work today. These selected paragraphs distill the contents and give you a quick look inside The Kama Sutra of Vatsyayana; Translated From the Sanscrit in Seven Parts With Preface, Introduction and Concluding Remarks:

Thus the work being written in parts by different authors was almost unobtainable, and as the parts which were expounded by Dattaka and the others treated only of the particular branches of the subject to which each part related, and moreover as the original work of Babhravya was difficult to be mastered on account of its length, Vatsyayana, therefore, composed his work in a small volume as an abstract of the whole of the works of the above-named authors.


...Sending her female attendant to bring the flowers used by him on the previous day, in order that she may use them herself as a mark of affection, also asking for the mixture of betel nut and leaves that have remained uneaten by him; expressing wonder at his knowledge of sexual intercourse, and the several means of enjoyment used by him; learning from him the sixty-four kinds of pleasure mentioned by Babhravya; continually practising the ways of enjoyment as taught by him, and according to his liking; keeping his secrets; telling him144 her own desires and secrets; concealing her anger; never neglecting him on the bed when he turns his face towards her; touching any parts of his body according to his wish; kissing and embracing him when he is asleep; looking at him with apparent anxiety when he is wrapt in thought, or thinking of some other subject than herself; showing neither complete shamelessness, nor excessive bashfulness when he meets her, or sees her standing on the terrace of her house from the public road; hating his enemies; loving those who are dear to him; showing a liking for that which he likes; being in high or low spirits according to the state that he is in himself; expressing a curiosity to see his wives; not continuing her anger for a long time; suspecting even the marks and wounds made by herself with her nails and teeth on his body to have been made by some other woman; keeping her love for him unexpressed by words, but showing it by deeds, and signs, and hints; remaining silent when he is asleep, intoxicated, or sick; being very attentive when he describes his good actions, and reciting them afterwards to his praise and benefit; giving witty replies to him if he be sufficiently attached to her; listening to all his stories, except those that relate to her rivals; expressing feelings of dejection and sorrow if he sighs, yawns, or falls down; pronouncing the words 'live long' when he sneezes; pretending to be ill, or to have the desire of pregnancy, when she feels dejected; abstaining from praising the good qualities of any body else, and from censuring those who possess the same faults as her own man: wearing anything that may have been given to her by him; abstaining from putting on her ornaments, and from taking food when he is in pain, sick, low-spirited, or suffering from misfortune, and condoling and lamenting with him over the same; wishing to accompany him if he happens to leave the country himself or if he be banished from it