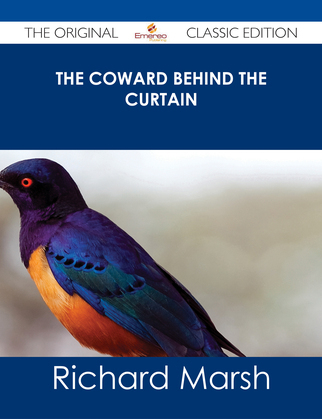 The Coward Behind the Curtain - The Original Classic Edition

Finally available, a high quality book of the original classic edition of The Coward Behind the Curtain. It was previously published by other bona fide publishers, and is now, after many years, back in print.

Get the PDF and EPUB NOW as well. Included in your purchase you have The Coward Behind the Curtain in EPUB AND PDF format to read on any tablet, eReader, desktop, laptop or smartphone simultaneous - Get it NOW.

Enjoy this classic work today. These selected paragraphs distill the contents and give you a quick look inside The Coward Behind the Curtain:

In that moment of her desperation, if she had only known where money was to be had, she would have made free with it, if the thing were possible, even without the owner's sanction, oblivious of any consequences which her action might entail; being persuaded that no worse fate could befall her than that that man should find her still in the room when he came back.

...His pose; his attitude; his disordered attire; something which looked out of his eyes; the obvious mental agitation which caused his countenance to wear that singular hue; the gleam of scarlet which was all that marked his tightly closed mouth; the ominous fashion in which, while standing perfectly still, he never took his glance from off the man in front of him--although she might not have been able to put the thing into words, everything about him spoke to the sensitive imagination of the girl of one who, for a very little, would throw everything aside in the fullness of his desire to gratify the lust of his rage.


...Yet, disposed as he evidently was to be as disagreeable as he could be, his rage altogether lacked that quality of intensity, of white heat, which marked the other; the something which caused the girl, when she appreciated, though only vaguely, the scene which was being enacted before her, to feel that it would be well that, at the earliest possible moment, she should make her presence known, for Mr Emmett's protection.