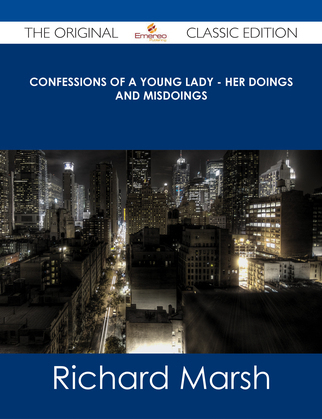 Finally available, a high quality book of the original classic edition of Confessions of a Young Lady - Her Doings and Misdoings. It was previously published by other bona fide publishers, and is now, after many years, back in print.

Get the PDF and EPUB NOW as well. Included in your purchase you have Confessions of a Young Lady - Her Doings and Misdoings in EPUB AND PDF format to read on any tablet, eReader, desktop, laptop or smartphone simultaneous - Get it NOW.

Enjoy this classic work today. These selected paragraphs distill the contents and give you a quick look inside Confessions of a Young Lady - Her Doings and Misdoings:

Having heard that things were in a bad way with us in this temple of the drama this young lady has brought us two pennyworths of German sausage to save us from actual starvation, and has expressed her intention--I don't quite follow that part, but so far as I can make out she's proposing to make our fortunes by beginning to be a Wonderful Girl; which it isn't necessary for her to begin to be, seeing as how I should say that she's been a Wonderful Girl ever since the moment she was born.'


...She must have been a very sensitive person for a schoolmistress--though I do not know why I should say that, because I have not the least idea why schoolmistresses should not be as sensitive as anybody else, since they are human--for when I began to tell her of how I had expended my capital on the purchase of what that grey-headed man had called his 'favourite joint,' she drew me quite close to her, and in the midst of my own anguish I actually felt the tears upon her cheeks.

...I don't know much about it, I'm not told everything, and I don't want to be told, sometimes the less I know the better I'm pleased; but from what I have heard, I should say anger wasn't the word for it; and that you're in for about as bad a time as ever you had in all your days!'