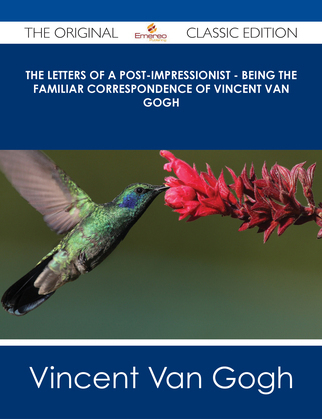 Finally available, a high quality book of the original classic edition of The Letters of a Post-Impressionist - Being the Familiar Correspondence of Vincent Van Gogh. It was previously published by other bona fide publishers, and is now, after many years, back in print.

This is a new and freshly published edition of this culturally important work by Vincent Van Gogh, which is now, at last, again available to you.

Get the PDF and EPUB NOW as well. Included in your purchase you have The Letters of a Post-Impressionist - Being the Familiar Correspondence of Vincent Van Gogh in EPUB AND PDF format to read on any tablet, eReader, desktop, laptop or smartphone simultaneous - Get it NOW.

Enjoy this classic work today. These selected paragraphs distill the contents and give you a quick look inside The Letters of a Post-Impressionist - Being the Familiar Correspondence of Vincent Van Gogh:

I would like, however, to seize this opportunity to defend Margarete Mauthner against the charge of having made a “fantastic arrangement” of these letters; for, if the person who made this charge had only been acquainted with the facts of the case, he would have known that she had done no more (at least from page 39 onwards) than faithfully to follow Emile Bernard’s original arrangement of his friend’s correspondence in the “Mercure de France”; and surely we must assume that Emile Bernard, Van Gogh’s devoted admirer, was the best judge as to what should, or should not, appear of all that his friend had written.


...For while they, as new technicians seeking light and complementaries and values, deplored the spiritless and uninspired “oliographs” of their academical contemporaries, they completely overlooked the deeper truth; their artistic instincts were not strong enough to make them see that the spiritless and uninspired subject picture was the most poignant proof that could be found of the fact that mankind no longer possessed, to any passionate or intense degree, that which made the subject picture possible—that is to say, a profound faith in something greater and more vital either than the artists themselves or their art, something which gave not only art but also life a meaning and a purpose.


...Possessed as he was of a remarkable gift of observation, nature fortunately did not take long to tell him all that she has to tell the truly instinctive artist; for a man who could paint that still-life, “Apples in a Basket,” dedicated to Pissaro, and the still-life “A Statuette, a Rose and’ Books,” belonging, I believe, to Van Gogh’s family—not to speak of dozens of other marvels of observation, such as the “Chestnut in Bloom,” belonging to Frau Kröller, in which the essential character of the tree is beautifully seized by the happiest of conventions—would necessarily be a rapid and courageous learner of all that nature can teach, and would soon become conscious of having reached that decisive Rubicon, the imperative crossing of which means one of two alternatives—either the continuation of the old attitude to nature, which at this stage becomes mere slavery and no longer discipleship, or the mastering of nature which is the first step that reveals the mature artist of sound instincts.

About Vincent Van Gogh, the Author:

95 Hoping to have a gallery to display his work, his project at this time was a series of paintings including Van Gogh's Chair (1888), Bedroom in Arles (1888), The Night Café (1888), Cafe Terrace at Night (September 1888), Starry Night Over the Rhone (1888), Still Life: Vase with Twelve Sunflowers (1888), all intended to form the décoration for the Yellow House.

...Similarly in Arles, in spring 1888 he arranged his Flowering Orchards into triptychs, began a series of figures that found its end in The Roulin Family series, and finally, when Gauguin had consented to work and live in Arles side-by-side with Van Gogh, he started to work on The Décorations for the Yellow House, which