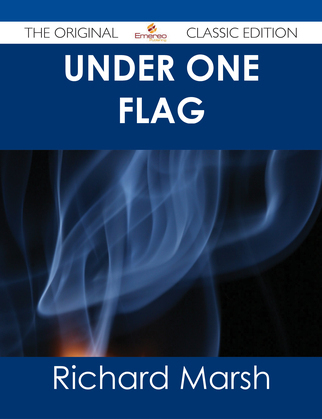 Under One Flag - The Original Classic Edition

Finally available, a high quality book of the original classic edition of Under One Flag. It was previously published by other bona fide publishers, and is now, after many years, back in print.

Get the PDF and EPUB NOW as well. Included in your purchase you have Under One Flag in EPUB AND PDF format to read on any tablet, eReader, desktop, laptop or smartphone simultaneous - Get it NOW.

Enjoy this classic work today. These selected paragraphs distill the contents and give you a quick look inside Under One Flag:

'I'm not fond of spying, and I'm not fond of them as is, but as he don't seem to be using you well, if I do find out who he's playing it off with--though, mind you, I don't see how I'm going to--still, as I say, if I should happen to find out, why, I'll tell you, straight!'


...When you said last night that you'd give me five pounds for my name and address I saw that you were fool enough for anything, so I gave you the first that came, and that happened to be a friend of mine's, and I'm in her place now, waiting for her to come back with my young man, so that's how you've chanced to find me here.'


...But on the morning of the twenty-fourth--Tuesday--I had had a letter--a most cheerful letter--in which Popham informed me that since one of his children had the measles, and another the mumps, and his wife was not well, and his own constitution was slightly unbalanced owing to a little trouble he had had with his motor--he had nearly broken his neck, from what I could gather--it had occurred to him that Christmas under his roof might not be such a festive season as he had hoped, and so he gave me warning.