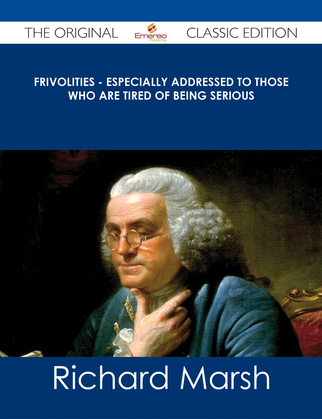 Finally available, a high quality book of the original classic edition of Frivolities - Especially Addressed to Those Who Are Tired of Being Serious. It was previously published by other bona fide publishers, and is now, after many years, back in print.

Get the PDF and EPUB NOW as well. Included in your purchase you have Frivolities - Especially Addressed to Those Who Are Tired of Being Serious in EPUB AND PDF format to read on any tablet, eReader, desktop, laptop or smartphone simultaneous - Get it NOW.

Enjoy this classic work today. These selected paragraphs distill the contents and give you a quick look inside Frivolities - Especially Addressed to Those Who Are Tired of Being Serious:

I come here in answer to an advertisement, at great personal inconvenience to myself, and I am shown into a room with a number of most extraordinary characters; and one person, who, I am sure, was the worse for drink, asks me the most impertinent questions, and when I appeal for protection to another individual, he tells me that he has enough to do in attending to his own business without interfering with other people's, and I have positively to ring the bell twice before I can receive any proper attention.'


...'As for me, I'm not going through the farce of describing the purse I lost, because I know very well you haven't got it; but I'll tell you this--I've come all the way from Hackney, and I've wasted a day, and I don't mean to leave this house till you've paid me my expenses.

...He wanted me to pin one number to the lot of them; and as I was a-arguing with him, and tryin' to understand how he made out as I could do that, seeing as how the pins was little ones, and the numbers not large ones neither, a lot of other gents came up, and this here young gent he got quite red in the face, and he snatched a number out of my hand and he walked off, and he left me staring.