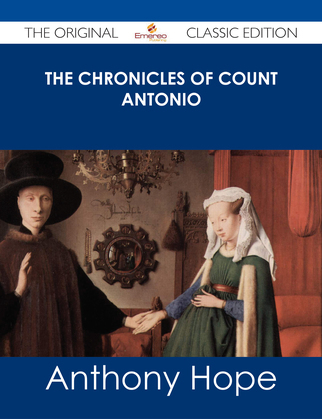 The Chronicles of Count Antonio - The Original Classic Edition

Finally available, a high quality book of the original classic edition of The Chronicles of Count Antonio. It was previously published by other bona fide publishers, and is now, after many years, back in print.

Get the PDF and EPUB NOW as well. Included in your purchase you have The Chronicles of Count Antonio in EPUB AND PDF format to read on any tablet, eReader, desktop, laptop or smartphone simultaneous - Get it NOW.

Enjoy this classic work today. These selected paragraphs distill the contents and give you a quick look inside The Chronicles of Count Antonio:

Of all the deeds that Count Antonio of Monte Velluto did during the time that he was an outlaw in the hills (for a price had been set on his head by Duke Valentine), there was none that made greater stir or struck more home to the hearts of men, howsoever they chose to look upon it, than that which he performed on the high hill that faces the wicket gate on the west side of the city and is called now the Hill of Duke Paul.

...Would it seem to him deep treachery if I should go privately to him and tell him how that on a certain day you would go forth with your guard to camp in the spurs of Mount Agnino, leaving the city desolate, and that on the night of that day I could contrive that Lucia should come secretly to the gate, and that it should be opened for her, so that by a sudden descent she might be seized and carried safe to his hiding-place before aid could come from Your Highness?'


...Then Bena took him by the hand, and the other guided his feet, and climbing up steep paths, over boulders and through little water-courses, they went, till at length Bena cried, 'We are at home, my lord;' and Paul, tearing off his bandage, found himself on a small level spot, ringed round with stunted wind-beaten firs; and three huts stood in the middle of the space, and before one of the huts sat Tommasino, composing a sonnet to a pretty peasant girl whom he had chanced to meet that day; for Tommasino had ever a hospitable heart.