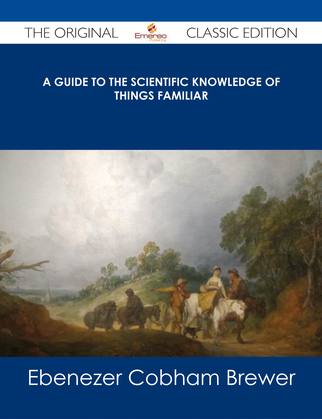 Finally available, a high quality book of the original classic edition of A Guide to the Scientific Knowledge of Things Familiar. It was previously published by other bona fide publishers, and is now, after many years, back in print.

This is a new and freshly published edition of this culturally important work by Ebenezer Cobham Brewer, which is now, at last, again available to you.

Get the PDF and EPUB NOW as well. Included in your purchase you have A Guide to the Scientific Knowledge of Things Familiar in EPUB AND PDF format to read on any tablet, eReader, desktop, laptop or smartphone simultaneous - Get it NOW.

Enjoy this classic work today. These selected paragraphs distill the contents and give you a quick look inside A Guide to the Scientific Knowledge of Things Familiar:

The object of the present book is to explain about 2000 of these “silly questions” (which are often more easily asked than answered) in language so simple that a child may understand it, yet not so childish as to offend the scientific; and in order that the answers may be strictly correct, not only the most approved modern authors have been consulted, but the manuscript has been submitted sheet by sheet to the revision of two gentlemen of acknowledged reputation for scientific attainments.

...Carbon (being solid), requires a great degree of heat to make it unite with oxygen, (or, in other words, to bring it into a state of perfect combustion): when coals are fresh laid on, more carbon is separated than can be reduced to combustion; and so it flies off in smoke.


...As every flame tends upwards; when a flame is made at the bottom of a fire, it ascends through the fuel and heats it: whereas, if the fire were lighted from the top, the flame would not come into contact with the fuel piled below.

About Ebenezer Cobham Brewer, the Author:

With detailed revisions by editor Henrietta Gerwig it formed the nucleus of Crowell's Handbook for Readers and Writers which in turn provided the nucleus of William Rose Benet's The Reader's Encyclopedia, 'veritably a new book', as Benet remarked; in revised form, it is still in print.


...John Sherren Brewer junior was an eminent historian and editor of British State Papers at the Public Record Office; William Brewer was a surgeon and was elected a Liberal MP for Colchester in 1868; Robert Kitton Brewer was a Doctor of Music and a Baptist Minister, and two of his sisters ran a Girls' School in Lime Tree Road, Norwich.