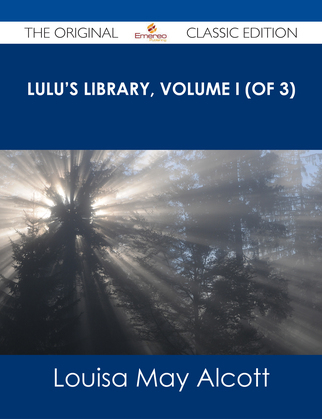 Lulu's Library, Volume I (of 3) - The Original Classic Edition

by Louisa May Alcott (Author)
Fiction
EPUB
Unlimited loans, One at a time
Details

Finally available, a high quality book of the original classic edition of Lulu's Library, Volume I (of 3). It was previously published by other bona fide publishers, and is now, after many years, back in print.

This is a new and freshly published edition of this culturally important work by Louisa May Alcott, which is now, at last, again available to you.

Get the PDF and EPUB NOW as well. Included in your purchase you have Lulu's Library, Volume I (of 3) in EPUB AND PDF format to read on any tablet, eReader, desktop, laptop or smartphone simultaneous - Get it NOW.

Enjoy this classic work today. These selected paragraphs distill the contents and give you a quick look inside Lulu's Library, Volume I (of 3):

Nobody told them to do it, but all the hands were clapped heartily before a single child stirred; then one by one they came to look up wonderingly at the pretty giver of the feast as she leaned down to offer them great yellow oranges, red apples, bunches of grapes, bonbons, and cakes, till all were gone, and a double row of smiling faces turned toward her as the children filed back to their places in the orderly way they had been taught.


Then each was led to her own tree by the good ladies who had helped mamma with all their hearts; and the happy hubbub that arose would have satisfied even Santa Claus himself,--shrieks of joy, dances of delight, laughter and tears (for some tender little things could not bear so much pleasure at once, and sobbed with mouths full of candy and hands full of toys).

...Lily was so surprised she sat down on a warm queen's cake that happened to be near, and watched Snap send down load after load of gingerbread to be eaten by children, who would have liked it much better if they had only known where it came from, as she did.

About Louisa May Alcott, the Author:

1 Raised by her transcendentalist parents, Abigail May and Amos Bronson Alcott in New England, she grew up among many of the well-known intellectuals of the day such as Ralph Waldo Emerson, Nathaniel Hawthorne, and Henry David Thoreau.

...In 1847, she and her family served as station masters on the Underground Railroad, when they housed a fugitive slave for one week and in 1848 Alcott read and admired the 'Declaration of Sentiments', published by the Seneca Falls Convention on women's rights, advocating for women's suffrage and became the first woman to register to vote in Concord, Massachusetts in a school board election. The 1850s were hard times for the Alcotts.