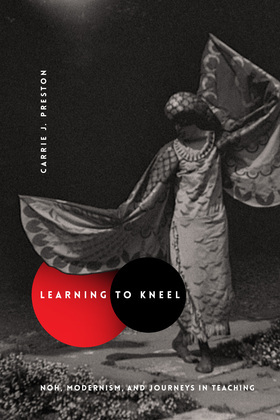 Learning to Kneel: Noh, Modernism, and Journeys in Teaching

by Carrie J. Preston (Author)
Fiction Drama
EPUB
unlimited loans, One at a time
Details
Throughout the twentieth century, Japanese noh drama was a major creative catalyst for American and European writers, dancers, and composers. The noh theater’s stylized choreography, poetic chant, spectacular costumes and masks, and engagement with history inspired Western artists as they reimagined new approaches to tradition and form. In Learning to Kneel, Carrie J. Preston locates noh’s influence on Pound’s imagism, Yeats’s Irish National Theater, Brecht’s learning plays, Britten’s church parables, and Beckett’s spare dramaturgy. These artists learned about noh from an international cast of collaborators, including the Tokyo-born dancer and theater artist Ito Michio, who performed with Pound in dance-poem recitals and in Yeats’s famous noh adaptation, At the Hawk’s Well.

Preston’s work has been profoundly shaped by her training in noh performance technique under a professional actor in Tokyo, who taught her to kneel, bow, chant, and submit to the teachings of a conservative tradition. After initially assuming noh lessons would feel humiliating, Preston found herself experiencing the value of and pleasure in submission to an expert teacher and training regimen. This cross-cultural exchange challenged her assumptions about effective teaching, particularly her tendencies to emphasize innovation and subversion and overlook the complex ranges of agency experienced by teachers and students. It also inspired new perspectives regarding the generative relationship between Western writers and Japanese performers. Pound, Yeats, Brecht, and others are often criticized for their Orientalist tendencies and misappropriation of noh, but Preston’s analysis and her own journey reflect a more nuanced understanding of cultural exchange.