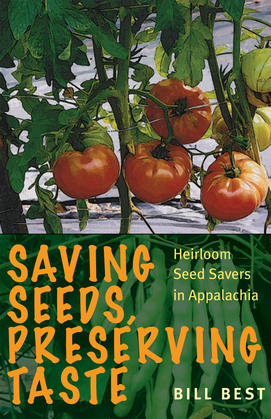 The Brown Goose, the White Case Knife, Ora’s Speckled Bean, Radiator Charlie’s Mortgage Lifter — these are just a few of the heirloom fruits and vegetables you’ll encounter in Bill Best’s remarkable history of seed saving and the people who preserve both unique flavors and the Appalachian culture associated with them. As one of the people at the forefront of seed saving and trading for over fifty years, Best has helped preserve numerous varieties of beans, tomatoes, corn, squashes, and other fruits and vegetables, along with the family stories and experiences that are a fundamental part of this world. While corporate agriculture privileges a few flavorless but hardy varieties of daily vegetables, seed savers have worked tirelessly to preserve genetic diversity and the flavors rooted in the Southern Appalachian Mountains — referred to by plant scientists as one of the vegetative wonders of the world.

Saving Seeds, Preserving Taste will introduce readers to the cultural traditions associated with seed saving, as well as the remarkable people who have used grafting practices and hand-by-hand trading to keep alive varieties that would otherwise have been lost. As local efforts to preserve heirloom seeds have become part of a growing national food movement, Appalachian seed savers play a crucial role in providing alternatives to large-scale agriculture and corporate food culture. Part flavor guide, part people’s history, Saving Seeds, Preserving Taste will introduce you to a world you’ve never known — or perhaps remind you of one you remember well from your childhood.