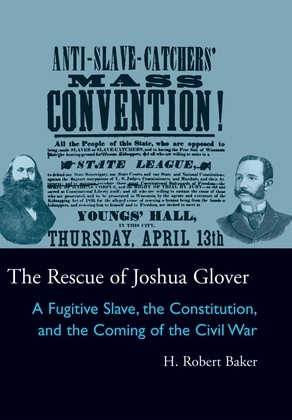 The Rescue of Joshua Glover: A Fugitive Slave, the Constitution, and the Coming of the Civil War

On March 11, 1854, the people of Wisconsin prevented agents of the federal government from carrying away the fugitive slave, Joshua Glover. Assembling in mass outside the Milwaukee courthouse, they demanded that the federal officers respect his civil liberties as they would those of any other citizen of the state. When the officers refused, the crowd took matters into its own hands and rescued Joshua Glover. The federal government brought his rescuers to trial, but the Wisconsin Supreme Court intervened and took the bold step of ruling the Fugitive Slave Act unconstitutional.

The Rescue of Joshua Glover delves into the courtroom trials, political battles, and cultural equivocation precipitated by Joshua Glover's brief, but enormously important, appearance in Wisconsin on the eve of the Civil War.

H. Robert Baker articulates the many ways in which this case evoked powerful emotions in antebellum America, just as the stage adaptation of Uncle Tom's Cabin was touring the country and stirring antislavery sentiments. Terribly conflicted about race, Americans struggled mightily with a revolutionary heritage that sanctified liberty but also brooked compromise with slavery. Nevertheless, as The Rescue of Joshua Glover demonstrates, they maintained the principle that the people themselves were the last defenders of constitutional liberty, even as Glover's rescue raised troubling questions about citizenship and the place of free blacks in America.