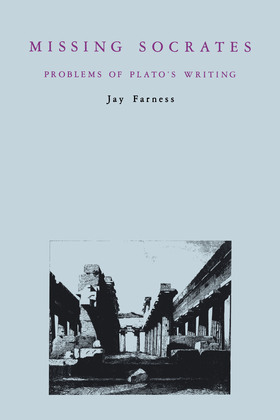 Plato's conversations of Socrates are among the most accessible philosophical texts most of us have ever read, yet the more one pursues the art or intelligibility of this writing, the more mysterious and paradoxical the Platonic texts become. What does it mean to study Plato, not philosophically as a maker of arguments, not poetically as a maker of dialogues, but literally as a maker of texts? This is a question that Jacques Derrida has made his own, and in this book Farness creates a dialogue with Derrida on Plato's texts.

Missing Socrates also provides a dialogue between Plato and Socrates on the question of speech versus writing and a study of the materiality of Plato's writing. Included among the various dialogues and themes developed here are rhetoric and courtroom practice in the Apology of Socrates; religion, skepticism, and the idea of transcendence in the Euthyphro; artistic practice and tradition in the Ion; education and political discipline in the Charmides; and rhetoric, writing, commemoration, and the motives of authorship in Phaedrus. In each of these discursive settings, Socrates unsuccessfully seeks a place or a mode for philosophy; Farness shows that the dialogues of Plato uncannily supply that lack.