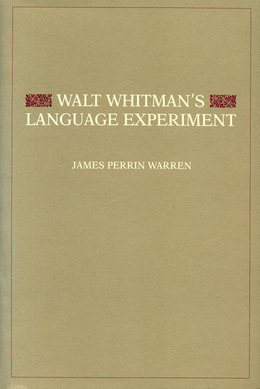 Combining intellectual history with literary analysis, this study of Whitman's language experiment from 1855 to 1892 offers a refreshing new look at his theory of language especially the English language in America—as an expression of a "national spirit" and relates that theory to the language and style of Whitman's major poems and essays. Whitman viewed American English as the most expressive, poetic language that ever existed, and he used his studies of historical linguistics to corroborate that view. Part 1 explicates the theory of language that Whitman developed in his linguistic notebooks, unpublished manuscripts, fugitive essays, and two chapters of the popular book Rambles Among Words. The diction and syntax of the 1855–1856 editions of Leaves of Grass are analyzed to show how Whitman's overwhelming interest in language theories resulted in the "language experiment" of the poems. Part 2 examines the ways in which Whitman's view of language as an expression of the constantly evolving spirit of America subtly shifted to a more cumulative, backward-looking vision of linguistic and spiritual change. Analysis of the diction, syntax, and organization of the last four editions of Leaves of Grass reveals how this shift in vision affected the style of Whitman's poetry and prose from 1860 to 1892. Whitman's groundbreaking poetic style, the author concludes, was a direct consequence of his view of language and the human spirit as dynamic, progressivist, and actively changing within a temporal world. Conversely, Whitman's experiments in both prose and poetry helped confirm his view of linguistic and spiritual evolution.