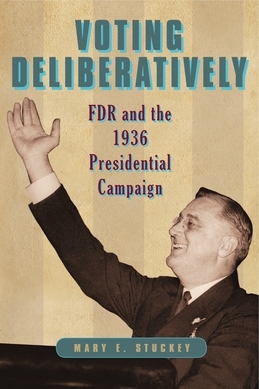 The 1932 election of Franklin Delano Roosevelt seemed to hold the promise of Democratic domination for years to come. However, leading up to the 1936 election, persistent economic problems, a controversial domestic agenda, and the perception of a weak foreign policy were chipping away at public support. The president faced unrelenting criticism from both the Left and the Right, and it seemed unlikely that he would cruise to the same clear victory he enjoyed in 1932. But 1936 was yet another landslide win for FDR, which makes it easy to forget just how contested the campaign was. In Voting Deliberatively, Mary Stuckey examines little-discussed components of FDR’s 1936 campaign that aided his victory. She reveals four elements of this reelection campaign that have not received adequate attention: the creation of public opinion, the attention paid to local organizations, the focus on specific kinds of interests, and the public rhetoric that tied it all together. Previous studies of the 1936 presidential election discuss elements such as FDR’s vulnerability before the campaign and the weakness of Republican candidate Alf Landon. But these histories pay little attention to the quantity and quality of information Roosevelt acquired, the importance of organizations such as the Good Neighbor League and the Committee of One, the mobilization of the vote, and the ways in which these organizational strategies fused with Roosevelt’s rhetorical strategies. Stuckey shows how these facets combined in one of the largest victories in Electoral College history and provided a template for future victory.