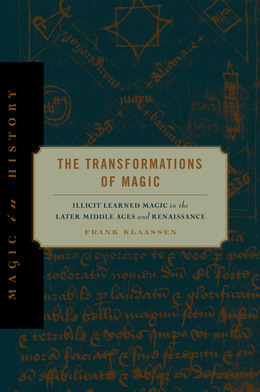 The Transformations of Magic

In this original, provocative, well-reasoned, and thoroughly documented book, Frank Klaassen proposes that two principal genres of illicit learned magic occur in late medieval manuscripts: image magic, which could be interpreted and justified in scholastic terms, and ritual magic (in its extreme form, overt necromancy), which could not. Image magic tended to be recopied faithfully; ritual magic tended to be adapted and reworked. These two forms of magic did not usually become intermingled in the manuscripts, but were presented separately. While image magic was often copied in the fourteenth and fifteenth centuries, The Transformations of Magic demonstrates that interest in it as an independent genre declined precipitously around 1500. Instead, what persisted was the other, more problematic form of magic: ritual magic. Klaassen shows that texts of medieval ritual magic were cherished in the sixteenth century, and writers of new magical treatises, such as Agrippa von Nettesheim and John Dee, were far more deeply indebted to medieval tradition—and specifically to the medieval tradition of ritual magic—than previous scholars have thought them to be.