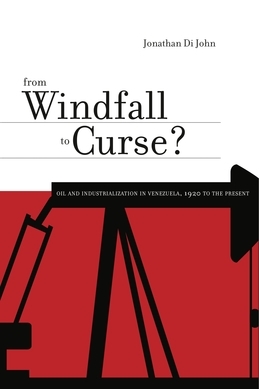 From Windfall to Curse?

Since the discovery of abundant oil resources in the 1920s, Venezuela has had an economically privileged position among the nations of Latin America, which has led to its being treated by economic and political analysts as an exceptional case. In her well-known study of Venezuela’s political economy, The Paradox of Plenty (1997), Stanford political scientist Terry Karl argued that this oil wealth induced extraordinary corruption, rent-seeking, and centralized intervention that resulted in restricting productivity and growth. What this and other studies of Venezuela’s economy fail to explain, however, is how such conditions have accompanied both growth and stagnation at different periods of Venezuela’s history and why countries experiencing similar levels of corruption and rent-seeking produce divergent developmental outcomes.

By investigating the record of economic development in Venezuela from 1920 to the present, Jonathan Di John shows that the key to explaining why the economy performed much better between 1920 and 1980 than in the post-1980 period is to understand how political strategies interacted with economic strategies—specifically, how politics determined state capacity at any given time and how the stage of development and development strategies affected the nature of political conflicts. In emphasizing the importance of an approach that looks at the political economy, not just at the economy alone, Di John advances the field methodologically while he contributes to a long-needed history of Venezuela’s economic performance in the twentieth century.