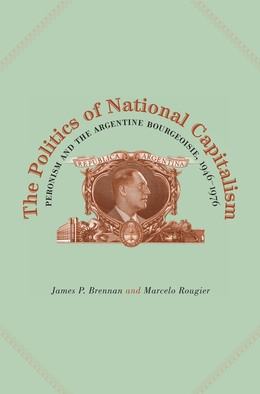 The Politics of National Capitalism

In mid-twentieth-century Latin America there was a strong consensus between Left and Right—Communists working under the directives of the Third International, nationalists within the military interested in fostering industrialization, and populists—about the need to break away from the colonial legacies of the past and to escape from the constraints of the international capitalist system. Even though they disagreed about the desired end state, Argentines of all political stripes could agree on the need for economic independence and national sovereignty, which would be brought about through the efforts of a national bourgeoisie.

James Brennan and Marcelo Rougier aim to provide a political history of this national bourgeoisie in this book. Deploying an eclectic methodology combining aspects of the “new institutionalism,” the “new economic history,” Marxist political economy, and deep research in numerous, rarely consulted archives into what they dub the “new business history,” the authors offer the first thorough, empirically based history of the national bourgeoisie’s peak association, the Confederación General Económica (CGE), and of the Argentine bourgeoisie’s relationship with the state.

They also investigate the relationship of the bourgeoisie to Perón and the Peronist movement by studying the history of one industrial sector, the metalworking industry, and two regional economies—one primarily industrial, Córdoba, and another mostly agrarian, Chaco—with some attention to a third, Tucumán, a cane-cultivating and sugar-refining region sharing some features of both. While spanning three decades, the book concentrates most on the years of Peronist government, 1946–55 and 1973–76.